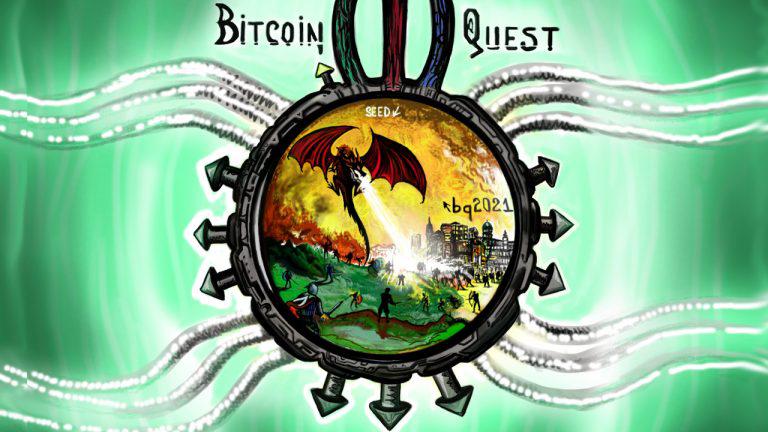 There’s an online-sleuthing contest starting on January 21st called “Bitcoin Quest,” where individuals can leverage their crypto-analytical skills to hunt for mnemonic bitcoin seed phrases hidden in artwork. Winners who drain the artwork’s crypto holdings will be able to win a Bitcoin Quest analyst certificate, 13 prizes worth $150 each, and three Satochip hardware wallets.

The teams behind the crypto industry organizations Hotmine, Its Business Baby, School Bitcoin, Satochip, and the Ed Khan Crypto Gallery have started a contest called Bitcoin Quest. The interesting event allows people to find bitcoin seeds hidden in unique artwork. People looking to join the online treasure hunt can check out the rules and guidelines here.

So far, there are two Telegram groups people can join the Bitcoin Quest hunt for mnemonic bitcoin seeds in both Russian and English languages. One of the organizers behind the Bitcoin Quest art contest told news.Bitcoin.com, the event will officially begin on January 21, 2021, and Telegram users should leverage the @helpmyquestbot to get a bunch of info regarding the quest.

“The crypto analyst contest where bitcoin is hidden in the art is an adventure journey,” the Bitcoin Quest announcement details. “Participants show their analytical skills by burning through the details of a large picture. The target for participants is to find the words and compile a bitcoin seed. It is 14 words in length and grants access to bitcoins kept on the winning addresses (13 of them + 3 Satochip ones) within Electrum Bitcoin Wallet (PC version),” the organizers add.

Bitcoin Quest is a project developed by Jeff Fawkes aka ‘Bitpainter, an artist who has been hiding seeds in pictures since 2017.

Contest winners will be able to attempt to win 13 bitcoin prizes in the artwork worth $150 each and three Satochip hardware wallets. The Satochip wallets will also feature a unique print from the 2021 Bitcoin Quest contest. Participants will also get a “Bitcoin Quest Analyst Certificate,” and with such a document, “nobody will dare to doubt your skills,” the contest creators emphasized.

Additionally, winners will be recorded in an immutable fashion and etched into a blockchain. “We will write a list of all winners into the Ethereum blockchain,” the Bitcoin Quest announcement notes. “It will be available via Eternal Note service msgeth.com, or via Etherscan.io. A transaction ID will be added to the individual certificate.”

The contest was created to get people to refine their knowledge about bitcoin and mnemonic seed phrases. Crypto skills are important and they will be needed, alongside hardware and software to participate in the latest quest. Users will need a Telegram account, knowledge about Electrum wallets, a computer, a large monitor, and more. Then in order to begin the quest hunting process, the user needs to obtain the picture from the Bitcoin Quest Telegram channels on January 21 and thereafter.

Simply find the seeds following the official quest rules and hints, and drain one or two of the winning seeds in the artwork. “You need to do all of the above faster than all the other crypto analysts,” the Bitcoin Quest creators told news.Bitcoin.com. Bitcoin Quest is a pet project from Jeff Fawkes aka ‘Bitpainter,’ an artist who has been creating art with bitcoin mnemonic seeds inside large drawings since 2017.

“I want to unite two of my great passions: art and crypto,” Fawkes said. “That’s where the idea of ‘Bitcoin Quest’ appeared. It’s a competition where I draw pictures with hidden bitcoin wallet seeds in them, and you keep whatever BTC you find,” the artist concluded.