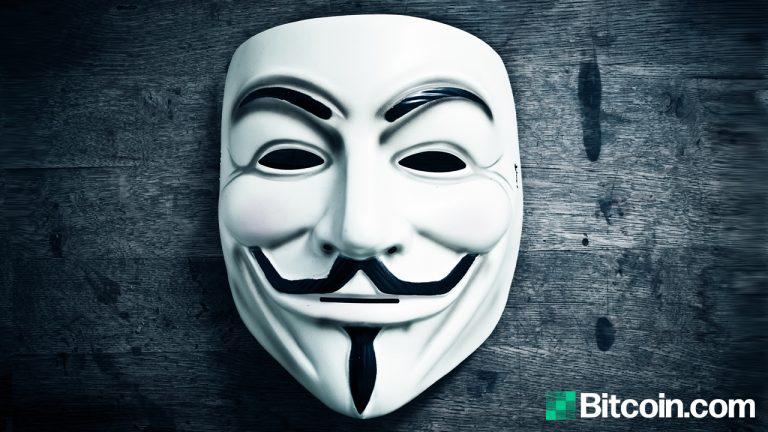 12 years ago, Bitcoin’s inventor Satoshi Nakamoto launched the network after revealing the cryptocurrency concept via the white paper a few months prior. At approximately 18:15:05 UTC, the network launched its first block and since then, over 664,000 bitcoin blocks have been mined. Moreover, on the 12th anniversary of the network coming to life, a large string of 2010 block rewards started moving after more than ten years of sitting idle.

The 12th Anniversary of the Bitcoin Blockchain

Cryptocurrency proponents are celebrating the invocation of the first computational network to solve the Byzantine Fault dilemma created by the pseudonymous inventor Satoshi Nakamoto. The birth of the Bitcoin (BTC) network is quite special and over the last 12 years, the crypto asset has become extremely valuable reaching a high today on January 3, at $34,800 per unit.

After Satoshi shared his cryptocurrency concept to a few interested individuals online on Halloween 2008, a little more than three months later he launched the hardcoded block reward, otherwise known as ‘block zero’ or the ‘genesis block.’ 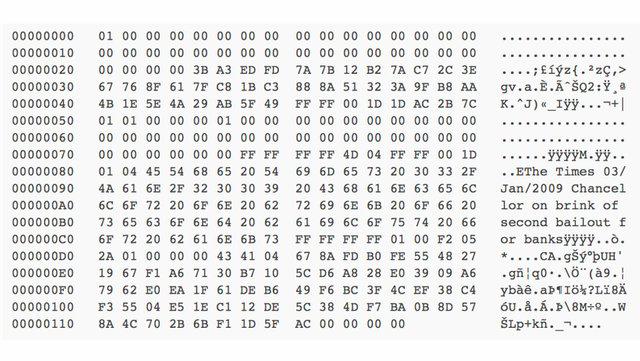 Block zero or the genesis block has the usual 50 bitcoin reward, but these particular bitcoins can never be spent. The genesis block has two leading hex zeroes as well, which was a common characteristic for early blocks back then. Furthermore, the infamous block zero also contained a message that can be found in the block’s coinbase parameter.

The Times 03/Jan/2009 Chancellor on brink of second bailout for banks.

The genesis block today not only has the 50 bitcoin block reward that cannot be spent, but also people have sent small fractions of bitcoin to the address ever since it was launched. The genesis block address has seen approximately 2,722 transactions and there’s now a cumulative total of 68.35 BTC sitting idle.

These days, bitcoin blocks are quite predictable and are processed every 10 minutes or so by miners. But the block (1) that followed the hardcoded genesis block did not occur until seven days later. The first transaction with the software programmer, Hal Finney, took place in block 9 or three whole days after block 1 was mined.

Now Satoshi Nakamoto also spent time with the community, all the way until December 2010. It is well known that the inventor also mined the crypto asset during those months he spent curating the network with the community.

Interestingly, it is assumed by various academic papers that Nakamoto had mined anywhere between 700,000 to 1.1 million BTC during his tenure kickstarting the network. The inventor did this allegedly with a single Windows-based personal computer. It is also assumed that Nakamoto has not spent any coins since they were initially mined, and his stash of a million bitcoin has sat idle since they were issued.

Quite a lot of old coins that stem from coinbase rewards have not been spent and they have sat dormant for well over ten years. For example, the onchain researchers from Glassnode tweeted on December 18, 2020, that “1.78 million bitcoins have never left their miner address.”

Interestingly, last year in 2020, news.Bitcoin.com discovered an old-school miner or miners who spent a consecutive number of 2010 block rewards in strings. Every string spent last year, has been around 20 to 21 block rewards from 2010 and these coins never moved once since the day they were issued.

Surprisingly, the mystery miner or miners have spent another large string of ‘sleeping bitcoins’ from the Satoshi-era today on the 12th anniversary of the Bitcoin network launch. On January 3, 2021, precisely 20 block rewards from 2010 were spent at block height 664,263. The old school miner from 2010 sent the 1,000 bitcoins worth over $339 million to a BTC address that started with “35grPirp.”

After the initial consolidation, the 1,000 BTC was split up into fractions following the exact same patterns news.Bitcoin.com discovered with all the other 2010 block strings. Today’s 20 block spend was caught by Btcparser.com, and a visual perspective of the string of 2010 blocks spent on theholyroger.com’s “Satoshi Bags Tracker.” 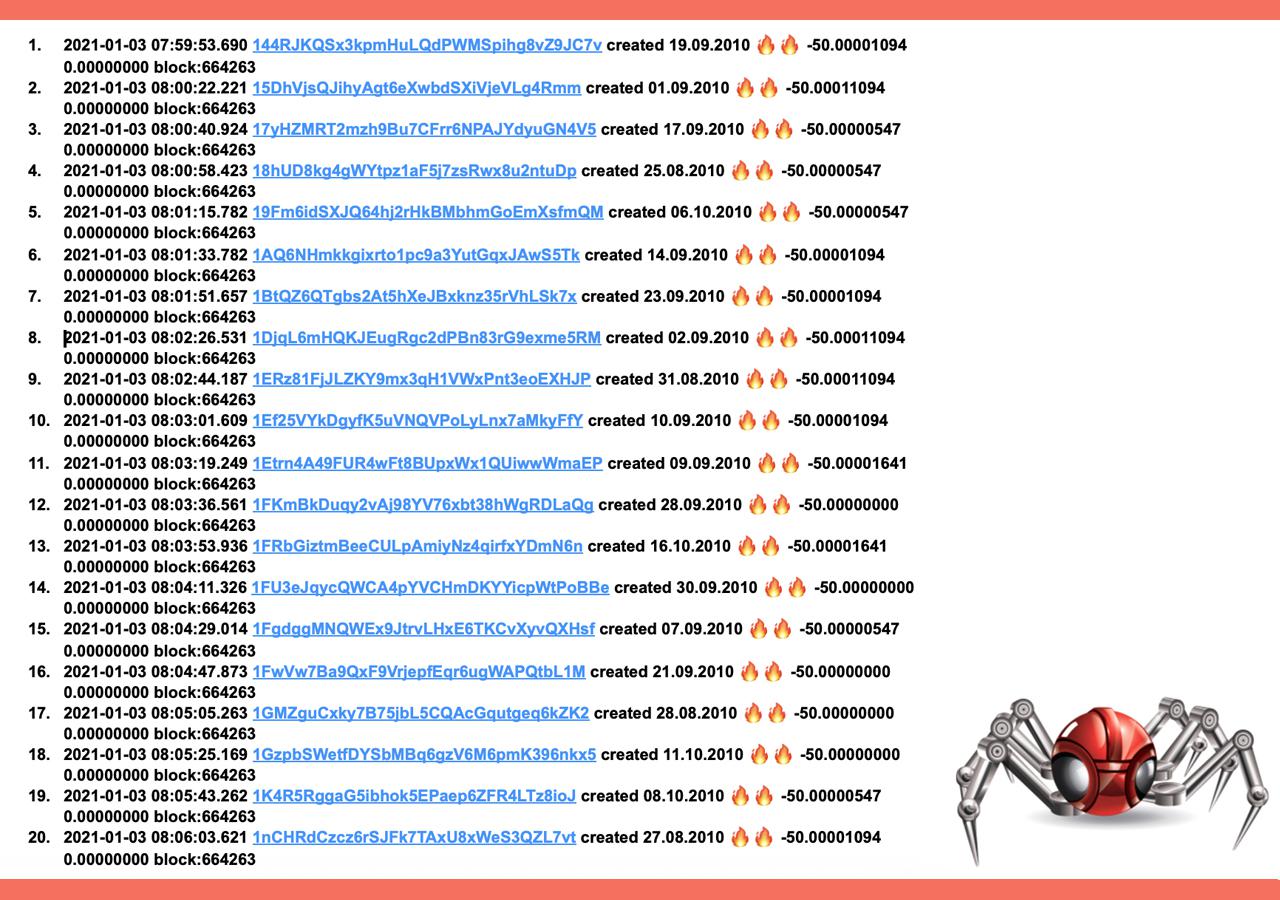 This morning (EST) on the 12th anniversary of the Bitcoin blockchain, Btcparser.com caught 20 old school block rewards from the 2010 ‘Satoshi-era’ transfer.

Usually, this miner, if it is one single entity will spend one more 2010 block a little later on in the day to make the tally 21 block rewards spent. Decade-old block reward spends from the ‘Satoshi era’ are quite rare, but they have been picking up steam since 2020.

It is also worth noting that the old school miner always spends the corresponding bitcoin cash (BCH) block rewards too, but not the bitcoinsv (BSV) rewards. The only time the miner spent block rewards on all three chains was the 21 block rewards from 2010 spent on March 11, 2020, the day before the infamous ‘Black Thursday.’ 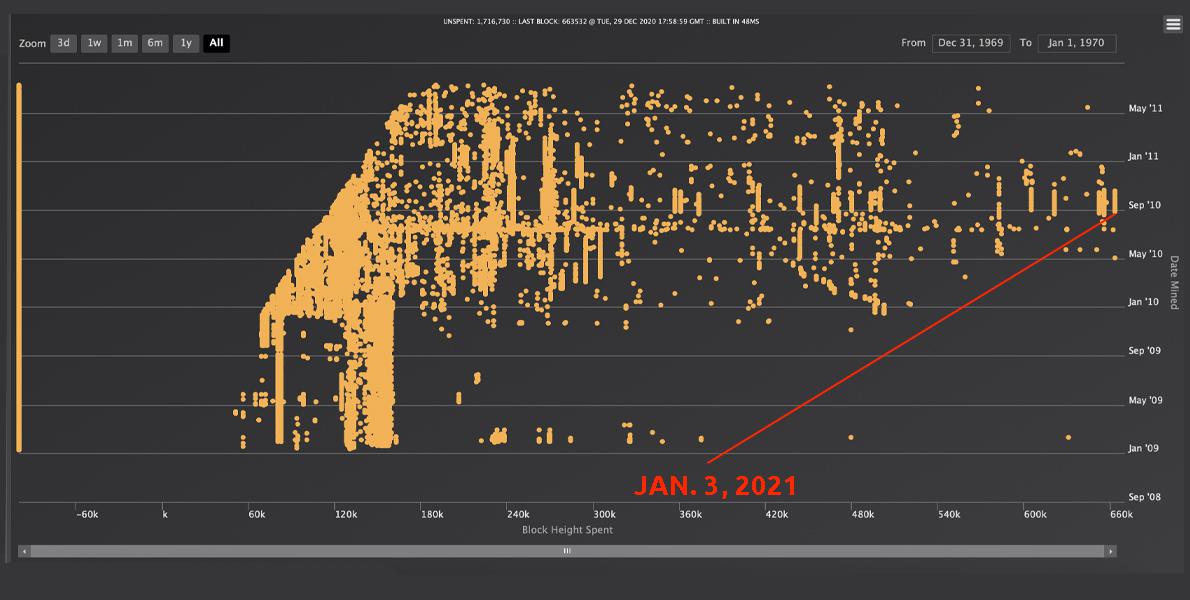 Today’s block spends from 2010 are quite special, seeing how they were transferred on Bitcoin’s birthday, while the crypto asset also touched another all-time price high as well.

We really don’t know if these coins were sold or plan to be sold on the open market. The technical term “spent” simply means the coins left the original address they stemmed from, and it doesn’t necessarily mean the coins are being sold on exchanges. Moreover, the term “Satoshi-era,” also doesn’t mean the coins derived from Nakamoto either, as the term simply means the inventor was around during this time period.