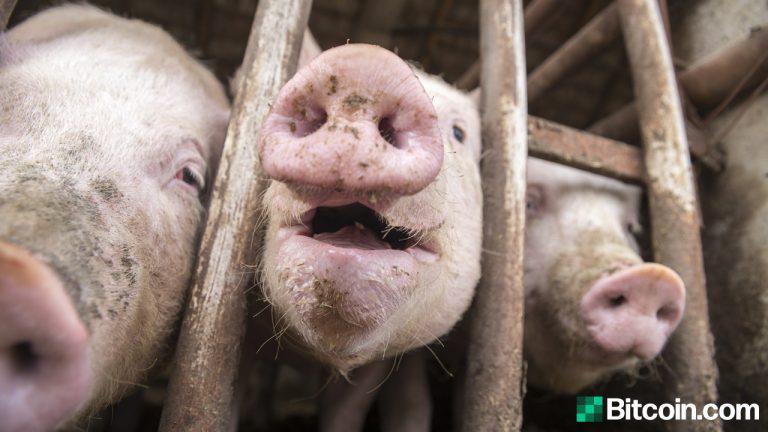 The United States Congress has approved a $900 billion Covid-19 relief package that’s tethered to the government’s $2.3 trillion year-end funding plan. Of course, talks of Americans getting $600 checks have started to circulate online, but reports also include the discussions of unwarranted spending and unlimited pork funds.

$600 Is the Equivalent of Marie Antoinette’s: ‘Let Them Eat Cake’

As soon as mainstream media news outlets started reporting on the fact that the U.S. Congress has approved a $900 billion Covid-19 relief package, Americans started talking about the $600 check they may get. The commentary toward politicians was less than pleasant and on Twitter, the phrase commonly attributed to Marie Antoinette, “Let them eat cake” was trending during the last 24 hours.

$600 is the equivalent of Marie Antoinette saying "let them eat cake". Remember how that turned out for Marie? Just sayin'.

The $900 billion Covid-19 relief package is a whopping 5,593 pages long and according to Kentucky Representative Thomas Massie (R-KY 4th District), Democrats didn’t even want to read the bill.

“Reminder: The House has a rule to give everyone 72 hours to read the bills,” Massie tweeted. “Every Democrat in the House voted to suspend that rule and that’s why we’re voting on a 5,500+ page bill tonight with less than 8 hours to read it.”

While Americans will get a $600 stimulus check, billions in pork funds have been approved for the political class including a 1% pay raise.

Additionally, on social media and online forums, many Americans discussed the vast amount of pork barrel funds inserted into the latest $900 billion program, and the total $2.3 trillion year-end funding plan. A “pork” or “pork funding” is when bureaucrats distribute funding to certain government programs and the costs are spread among taxpayers.

The year-end funding legislation also allocates $284 billion to the Paycheck Protection Program (PPP). Unfortunately, many Americans were not pleased with the last PPP distribution as it was intended for small businesses but a great majority of the funds were scraped up by big businesses.

The pork U.S. politicians approved is extremely lavish and seems to benefit the political class the most. For instance, Congress gave themselves and all federal employees a 1% pay raise. The infamous zerohedge.com journalist, Tyler Durden, published a fantastic collection of a great number of pork barrel funds added to the Covid-19 bill.

But the list is far larger and over the course of the last 24 hours, many people have been scrutinizing the so-called relief bill. 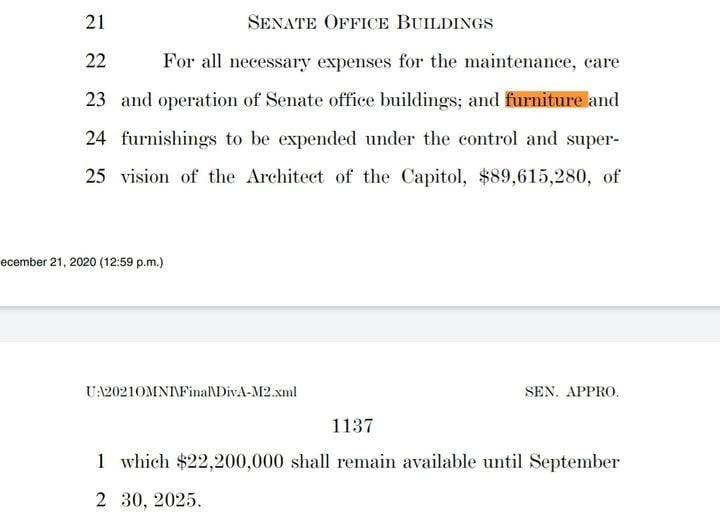 Millions of dollars will be set aside to provide the U.S. Senate with new furniture.

The massively sized Covid-19 package will give billions to foreign countries, millions to the Kennedy Center, and more. For example, the family members of unauthorized U.S. citizens will get up to $1,800. There’s even a new law tucked away into the bill that would make illegal streaming a felony offense. The colossal 2.3 trillion-dollar package is the largest ever considered by Congress, so big that the 5,593-page bill had to be transported by a 4-wheel dolly.

Unfortunately for so many people in need the $600 stimulus check is the equivalent of Marie Antoinette's "Let them eat cake." Congress is completely out of touch with the people. Do you feel me?

While the U.S. government has forcefully shut down hundreds of thousands of small businesses across the nation, the new bill approves $89,615,280 for the U.S. Senate to buy new furniture.

The pork in this COVID relief bill is legendary. Have you seen anything like it before? Seems like 60% of the funds are going outside our country.

Scrambling to Approve $2.3 Trillion During the Holiday Week Is No Coincidence

The popular Twitter account Oilfield Rando has also been tweeting about many of these unwarranted expenditures by the U.S. government and making fun of all the pork loaded into the Covid-19 relief bill. “$750,000,000 for Fossil Energy Research Development? Rando asked on Twitter. “Who gets this?” Rando continued his tirade on the U.S. government and said:

$222,724,000 to update the IRS’s ‘business systems.’ You know, the IRS that said they were too poor to investigate super-wealthy offenders, and that’s why they focused on investigating the middle class.

It is clear and blatant that U.S. bureaucrats have added a great amount of pork-barrel funding into the relief bill. But most politicians in America are acting like they scrambled to pass the $900 billion relief package in an effort to address economic hardships.

Senator Rand Paul, (R-KY) blasted U.S. Congress members when he addressed them on the Senate floor on Monday. Paul essentially said that Republican and Democrat leaders are basically one and the same. “To so-called conservatives who are quick to identify the socialism of Democrats: If you vote for this spending monstrosity, you are no better,” Paul exclaimed. The Youtube video of Paul’s Senate floor speech also went viral on social media and forums

“If free money was the answer… if money really did grow on trees, why not give more free money?” Paul stressed. “Why not give it out all the time? Why stop at $600 a person? Why not $1,000? Why not $2,000? Maybe these new Free-Money Republicans should join the Everybody-Gets-A-Guaranteed-Income Caucus? Why not $20,000 a year for everybody, why not $30,000? If we can print out money with impunity, why not do it?”

However, as usual bureaucrats and their friends are the ones who will be receiving a financial boost in the coming days. Meanwhile millions of Americans also are behind on rent and the latest legislation only extends the eviction protection program until the end of January.

Kentucky Representative Massie said, generally, massive bills like this are specifically saved for busy holiday weeks. “Bless your heart if you think the passage of a 5500+ page $trillion+ bill just randomly occurred Christmas week,” Massie tweeted. “If I’ve observed one thing during my time in DC, it’s that Congress saves its biggest bill for the week Congress [members] are most anxious to go home to their families.”

The $900 billion Covid-19 relief bill has been sent to President Donald Trump’s desk and now awaits his signature.

What do you think about all the pork added to the Covid-19 relief bill and end of the year funding? Let us know what you think about this subject in the comments section below.